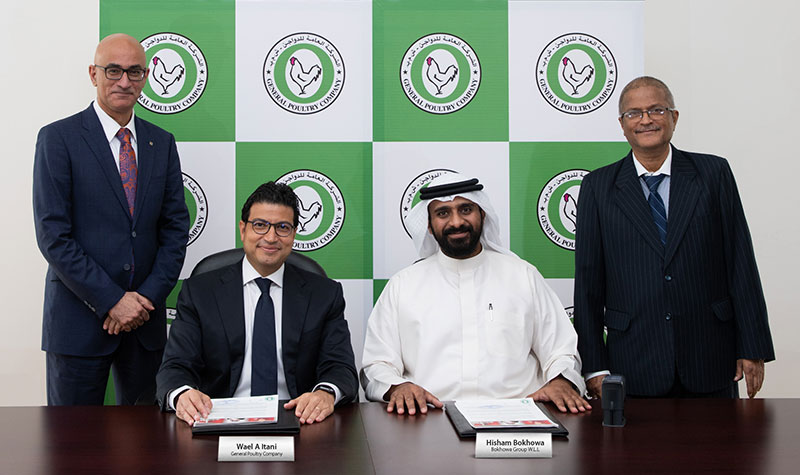 General Poultry Company (GPC), the leading supplier of locally produced fresh table eggs in the Kingdom of Bahrain, is poised to implement an expansion plan which will enable the company to significantly double its current production capacity gradually.

A wholly owned subsidiary of Mumtalakat Bahrain and established in 1977, GPC represents Bahrain’s heritage in poultry farming and table egg production and currently produces 136,000 cartons of table eggs per annum, commanding a 65% share of local table egg production, and 18% of the total market supply. GPC’s farm is located in Hamala, the Kingdom’s west agricultural zone.

After the tireless efforts of the company’s board of directors and close cooperation with the executive management, the expansion plan, due to kick off in the 2nd week of November 2020, will transform GPC into a fully automated enterprise operating with state-of-the-art technology, the highest level of biosecurity and premium food safety standards within the poultry farming and table egg production category.

In line with its expansion plans, GPC has commissioned Big Dutchman, Germany, the world’s leading poultry feeding systems and housing equipment manufacturer, to build and erect the farm equipment for, eight new, modern, houses which will serve as bird rearing and egg production facilities. GPC has also partnered with MOBA, the leading global manufacturer of grading, packing and processing equipment in the egg industry in The Netherlands, to provide state-of-the-art grading and packing machinery.

In keeping with the company’s commitment to partner with professional and qualified companies, Bokhowa Group, a leading Bahraini construction company, was awarded the construction project for the expansion, through a public bidding process under the supervision of the Tender Board.

Groundbreaking will occur in the 2nd week of November 2020 and construction of the Bird and Rearing houses and packing and storage facilities is slated to be completed by August 2021.

“This is going to be a game-changer, not only for the poultry industry in the Kingdom, but, also, for Bahrain, itself,” said Mr. Zainal. “Technology and automation are the factors driving GPC’s resurgence and, thus, the direction towards a major upgrade through large-scale automation and state-of-the-art technology.”

“We are honored to be the executing partners for GPC for this all-important project,” Mr. Bokhowa said. “And it is a privilege for us to be contributing towards such a landmark endeavor for the Kingdom of Bahrain.”

Once the expansion is complete, “GPC will be the only table egg production company in Bahrain, and amongst a select few within the region, with such an innovative, technologically advanced poultry egg farm,” Mr. Itani said. “The company will be migrating from manual to data-driven management.”

Mr. Itani added: “We are partnering with leading local talent and tailoring our own in-house operational and management platforms to drive efficiency and promote transparency.”

Other initiatives include an increased emphasis on food safety, quality assurance and bio-security platforms. GPC will be earning quality certifications ISO 9001, 14001, 45001, and FSSC 22000, by Q3-Q4 of 2020. GPC is already HACCP certified.

The GPC revamp is expected to lead to local, regional and international progression in terms of the company’s positioning, top executives said. Internally, within the Kingdom, they stated, it will ensure food security, operate with optimum efficiency and provide employment avenues for Bahrainis.

“We will continue to recruit and develop Bahraini talent and offer them the opportunity to learn, grow and make a difference to our organization, and society,” Mr. Itani said. “Capitalizing on local talent and nurturing a team of trustworthy leaders and co-workers is an essential element for our success.”

Support from Mumtalakat, the government and its various directorates, has been overwhelmingly positive, Mr. Zainal said. “Everyone is fully engaged,” he added. “They maintain constant contact to see how the project is evolving and we are grateful for this strong show of support from our stakeholders, which enabled the Board of Directors, along with the Executive Management, to focus on developing this important industry and consider future expansions.”

Established in 1977, General Poultry Company (GPC) is the leading producer of locally grown farm-fresh eggs in the Kingdom of Bahrain. General Poultry Company boasts of an efficient farm operation spread over 600,000 sqm in Hamala. GPC maintains the highest quality and standards of food hygiene and safety and is HACCP certified.